It's a pleasure to meet you!

I've worked as an engineer at NASA (the space place) for over thirty years. And, um ... that picture was taken more than a couple of years ago. Just saying.

"Imagine how it would feel to ride a motorcycle with the peace of mind that you're doing everything possible not to crash and leave your loved ones all alone."

That's what I sought after when I started riding at forty. But I struggled. Fear overcame me every time I rode. I didn't know if I was doing something wrong or if fear was a sign I should stop riding. Was I being selfish for putting myself at risk?

Two men took me under their wings and guided me. But instead of telling me the answers to my questions, they pointed me in the right direction so that I could answer them for myself.

One of the biggest things I learned along the way is that every rider can significantly reduce their chances of crashing. Why? Because study after study shows the same thing—that almost half of all motorcycle fatalities are caused by rider error.

If "loud pipes save lives" is your go-to safety strategy, you're probably not going to like what I have to say. But that's okay. I'm not for everyone.

For every rider, gaining the peace of mind that you're doing everything possible NOT to crash (for your family, for your friends, for yourself) should begin with understanding what triggers lowside and highside crashes—because most of these crashes are caused by rider error.

Yet, the popular motorcycle mega-books gloss over these crashes as if they don't matter—instead dedicating entire sections on how to get the most out of your first Sturgis rally. It's a huge disservice.

I'm so passionate about the subject that I pulled out the section in my book Motorcycle Smarts: Overcome Fear, Learn Control, Master Riding Well where I explain lowside and highside crashes (what are they, what triggers them, what can riders do to avoid them), and for a limited time, I'm giving that away as my free Guide to you.

I used my engineering background to breakdown these crashes in simple to understand terms, and I had an artist draw over twenty images of real crashes captured on video to show what's happening. It's the only thing like it out there.

The highlight of my motorcycling journey was riding from Alabama to Alaska (and back) with my riding buddy, Mike. The original idea sounded so far-fetched when he mentioned it one day at lunch that I almost spit out my food.

He wasn't joking. One year later, we completed the ride of a lifetime.

I was so moved by the experience that I wrote a book about it called Motorcycle Dream Ride: My Alabama to Alaska Adventure.

I don't ride as much as I used to—and frankly, I'm constantly evaluating when the right time might be to pick a different craft.

My motorcycle mentor, Fred, retired from riding when he was my age. And Fred's a very wise man.

I used to write articles for my first site MotorcycleMentor.com, but I've consolidated that content over time and instead focus on writing books, now. Words in books can live on past me and reach a broader audience.

My passion is simple—to explain how motorcycles work and why they crash in a unique, easy-to-understand way—in hopes that it might help ONE rider.

Motorcycle Smarts is about helping riders understand how motorcycles work and why they crash—so they can outlive their riding buddies.

Motorcycle Dream Ride is about friendship and doing what you didn't think was possible.

I'm always deeply honored when folks take the time to read what I have to say about a sport I fell in love with when I was twelve.

P.S. I've put together some of my most frequently asked questions and posted the answers below.

When did you start riding?

I begged my parents for a motorcycle when I was twelve. They said no, so I settled for a bright orange Honda Express moped. See photo below. I was rocking it with those green pants.

Then twenty-something years later, at forty, I decided it was time for a real motorcycle. 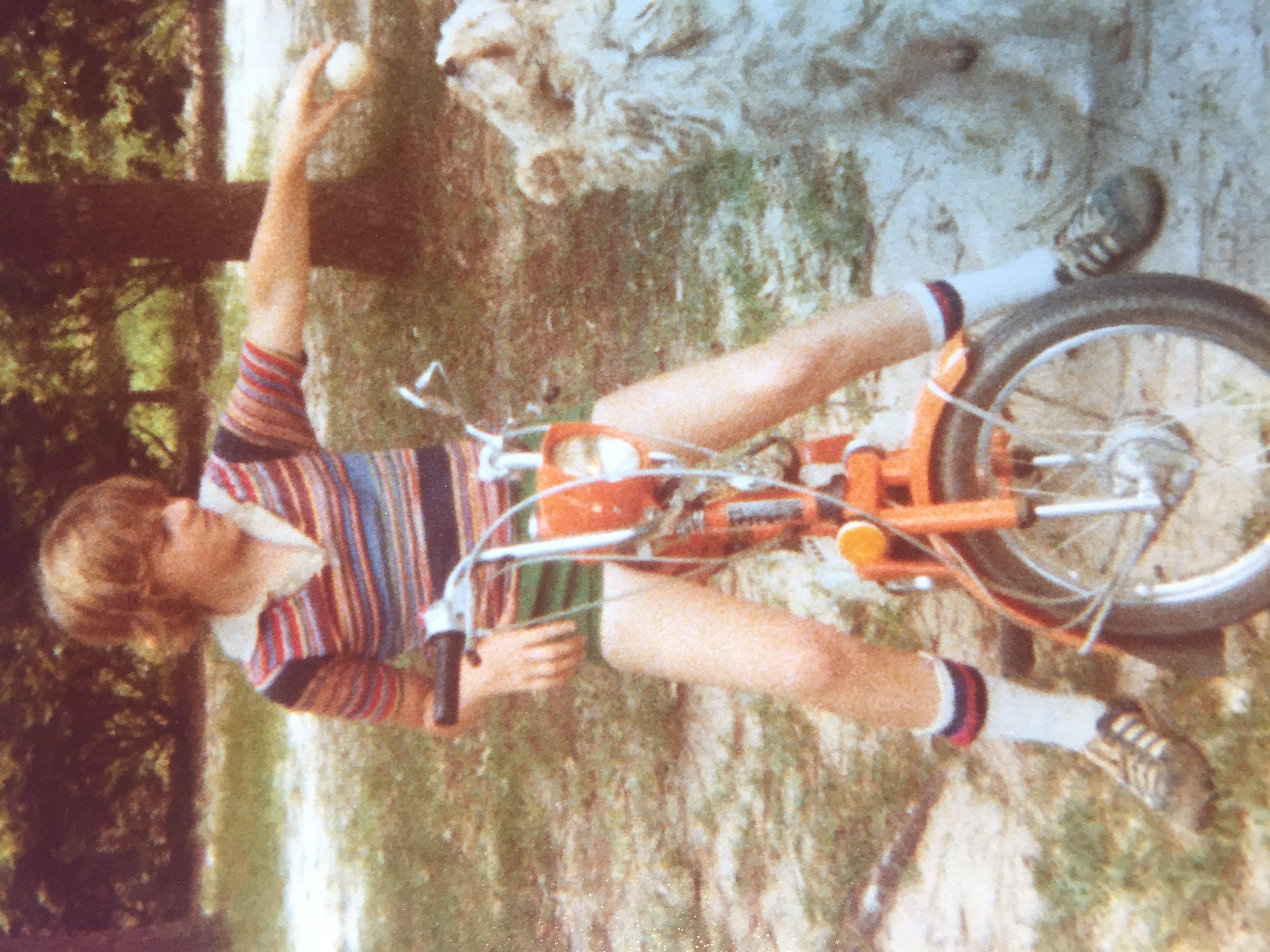 What was your first motorcycle?

My first real motorcycle was a 1998 Honda Interceptor VFR. Here's a photo soon after I purchased it in 2005. My riding buddy, Mike, and I were in Elizabethtown, Kentucky, on our first overnight ride. I loved that motorcycle. 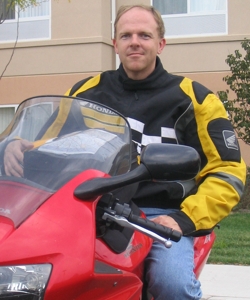 What do you ride now?

I ride a BMW R1200GSA. I purchased it right before Mike and I rode to Alaska in 2015. It just fits me. Great ergonomics. Plenty of power. Tons of storage. Huge fuel tank. And it has ABS.

Are you a motorcycle instructor?

No. I've thought about taking the training but never have. One of my mentors, a rider coach, cautioned me that it might impact what I could write since the organization would likely insist on being a part of the process. I wouldn't like that.

Are you the guy who does MotorcycleMentor.com?

Who were your Motorcycle Mentors?

Fred Applegate and Pete Tamblyn were my motorcycle mentors when I first started riding. Fred and I worked together at NASA before he retired. Pete was one of the top motorcycle instructors in the country—most recently with Stayin' Safe. I introduce them in more detail in my book Motorcycle Smarts. Fred graciously wrote the Forward for that book.

Does your wife ride?

No. She has no interest in riding solo, and I've never tried to twist her arm to ride with me. There was this Jetski "event" in the Gulf of Mexico early in our marriage whereby I dumped it, and we landed near a school of jellyfish. She doesn't trust me anymore when it comes to riding something two-up. Guess I can't blame her.

Who's your riding buddy Mike?

Mike and I met at work in the early 90s and have been friends ever since. I do most of my motorcycle adventures with him— almost always riding behind him because he's a great navigator. He's also an amazing friend. I wrote Motorcycle Dream Ride to document our journey to Alaska in 2015. The book isn't just about making to Alaska. It's about doing something we made excuses not to do for far too long. It's also about friendship. The most important part of writing the book was getting that part right.

Do you wear a helmet?

Yes. My state requires me to, but I still wear one even in states that don't. Besides the obvious protection aspects, I find that a full face helmet helps me ride more comfortably because it helps mitigate the discomfort of air rushing around my eyes and head. But what you wear is your choice.

Why are you such a proponent for ABS?

Most people argue for or against ABS using stopping distances as their metric. That's not the real reason ABS is so important. The reason I'll only own a motorcycle with ABS is because it virtually eliminates some of the most common rider-induced crashes. I unpack this in more depth in Motorcycle Smarts.

What motorcycle should I purchase?

That's a loaded question. My most important advice here would be to chose a motorcycle that has ABS. Even better, chose one that also has Traction Control and Stability Control. I explain why in Motorcycle Smarts.

How old are you?

Well. I started riding a real motorcycle when I was forty. That was in 2005. You'll need to do the math from there.

You can contact me here. Just so you know, I'm not the best at quickly answering emails. I spend most of my available time writing and editing books.

Are you available to speak at conferences and rallies?

No. I've made the decision to spend my limited free time outside of work on writing, sharing life with family, and hanging out with friends doing bourbon tastings and playing pickleball.

I would be happy to supply free copies of my books as give-aways. Contact me using the link in the tab above on "How can I contact you?"

Which book was harder to write?

They both took a really long time—partly because I had to find my voice and learn all the systems needed to publish a book. Motorcycle Smarts was fueled by my passion to explain motorcycles in a way that I couldn't find when I started riding. I used my engineering mind to write it, and that felt comfortable.

Motorcycle Dream Ride, on the other hand, demanded a totally different approach. Instead of giving just the facts, I had to connect with the emotions of the journey. I had to be raw and vulnerable. That part wasn't easy for me at first, but I matured into it over time. I also didn't want to say anything that would dishonor my friendship with Mike. For these reasons, Motorcycle Dream Ride was probably harder to write.